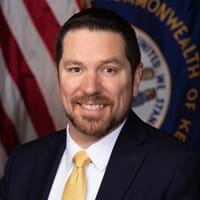 Steve Gold serves as the County Attorney in Henderson County, Kentucky. Since taking office in 2008, he has been involved in efforts to modernize Kentucky’s approaches juvenile to justice and child support by representing his colleagues on various boards, councils, and commissions established by all three branches of state government.

As a horrendous- yet curiously enthusiastic- piano and guitar player, Steve loves live music. He has served seven years as chairman and 20+ years on the board of directors of the Henderson Music Preservation Society, Inc., the non-profit behind the W.C. Handy Blues and Barbecue Festival, one the largest annual, free blues festivals in the nation.

Gold is a founding member and officer of the Cliff Hagan Boys & Girls Club - Henderson Unit Advisory Board which serves and develops hundreds of Henderson County young people. He is also a member of the board of the Kentucky YMCA Youth Association, the nation’s oldest and largest YMCA youth development organization.

Gold, his wife, Holly, and their two children, attend First Christian Church (Disciples of Christ) in Henderson, KY where he serves as an Elder.